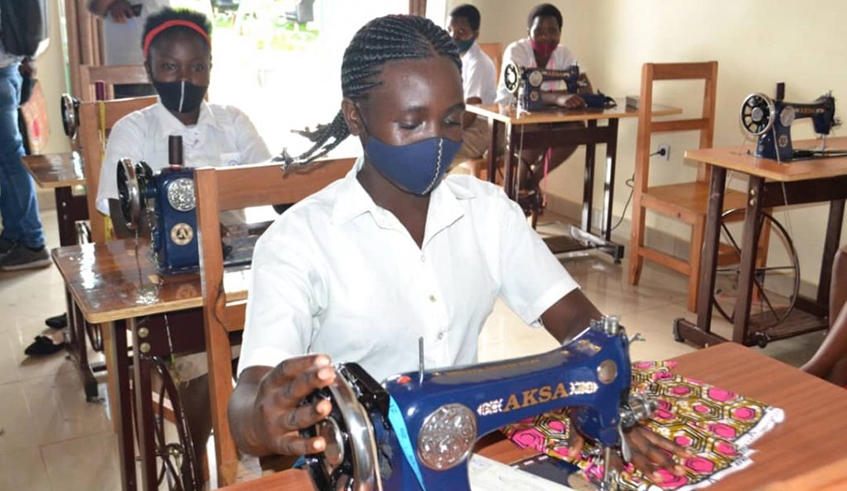 Teen mothers from vulnerable communities are appealing for financial support to get capital so as to create viable small businesses that could lift them out of poverty and eradicate malnutrition among their children.

According to official statistics, about 100,000 teenagers gave birth in the last four years in Rwanda, with many dropping out of school to become teen mothers.

However these numbers of teenage pregnancies have been on the rise since 2018.

Teen mothers and their parents trained on fighting unwanted pregnancies and eradicating malnutrition. All photos: Courtesy.

With the prevailing Covid-19 pandemic and the resultant measures to contain it, chances are high that numbers might have been increasing even faster than before.

Poverty, family conflict, emotional frustration from lockdowns and interrupted school schedules have all exposed vulnerable girls to both unplanned sex and sexual abuse which resulted into increased number of teen mothers, they say.

Some of those who spoke to Doing Business said that they tried some different small businesses but later counted losses due to lack of enough financial support and Covid-19 impact while others are struggling to eradicate malnutrition as they have no single source of income.

“When I gave to birth I faced discrimination and stigma from my family and community. I have been facing hurdles in raising my kid because I would not even have access to a soap at home as I have no source of income to afford basic needs on my own,” said 21-year old Shukrani Umutoni, from Rwamagana District, who gave to birth when she was in secondary school.

She said that her child is always sickly as she can’t always afford nutritious food due to lack of a sustainable source of income.

She said she tried the business of retailing tomatoes but later counted losses due to small capital.

“I got Rwf3, 000 capital to retail one basket of tomatoes in the market. The profit I would get is Rwf1, 000 within two days. I ended up counting losses and stopped such business because whenever I would gain between Rwf500 and Rwf1, 000 per basket of tomatoes, this wouldn’t satisfy my needs to the extent of even spending the capital,” she said.

Mutoni noted that she needs another capital to revive such a small business or do another business.

Mfurayabo, the founder and executive director of the foundation (centre), with teen mothers and their parents.

“Selling tomatoes requires one to always have money that can be invested for instances when tomatoes easily rot away in case they lack clients,” she said.

The teen mother is optimistic that she could soon get support to start vocational training on tailoring from which she hopes to do as a sustainable business.

Adeline Nyirabagume is the 16-year old teen mother who has a one-year-old baby.

She was impregnated, when she was in Primary five, by a man who has now vanished.

“Since then I have never seen him again. When I call him he tells me he is in Kigali and I have never received any support from him,” she narrated.

She said that her baby is currently suffering from malnutrition due to lack of capacity as she can barely afford her needs.

“I rarely feed my baby with vegetables and fruits among other nutritious foods due to lack of financial capacity. Sometimes we eat once a day. My baby’s life is not really well because I have no source of income. Any support to start an income generating business could help. I prefer tailoring and hairdressing,” she said.

However, she said, when teen mothers get income generating activities, it could help in healing their hearts as long as they see their children growing well.

“Tailoring has been found as a viable and sustainable source of income,” she said.

The teen mothers could soon breathe a sigh of relief as they are among teen mothers who trained on fighting stunting and malnutrition by MFURA Foundation, a non-governmental organization supporting teen mothers in Rwamagana District and will also gain vocational training to start tailoring as source of income to improve their lives.

Radjab Mbonyumuvunyi, the Mayor of Rwamagana District urged the teen mothers to work together and make use of gained vocational training skills to improve their lives and lives of other teen mothers.

“Any teen mother appealing for support can come to us and seek how their problems can be addressed,” he said.

Marie Clarisse Mfurayabo, the Founder and Executive Director of the foundation said that at least 50 teen mothers will acquire 18-month Vocational training on tailoring to enable them to raise their children and improve living conditions, under TUBARENGERE project in partnership with Rwamagana District.

“At least 40 teen mothers have also concluded tailoring courses and have started to generate income. For teen mothers to attain their objectives and make dreams true, they need to be specific on what they need and avoid peer pressure that can disorient them. Their future is brighter when they return to school and avoid more pregnancies and when they get support that can help improve their lives and afford needs,” she said.

“This is a way of healing their trauma and restoring hope,” she noted adding, “we have also trained parents of teen mothers reminding them to embark on parental responsibilities as a way of preventing more pregnancies among their children.”

However these numbers of teenage pregnancies have been on the rise since 2018.