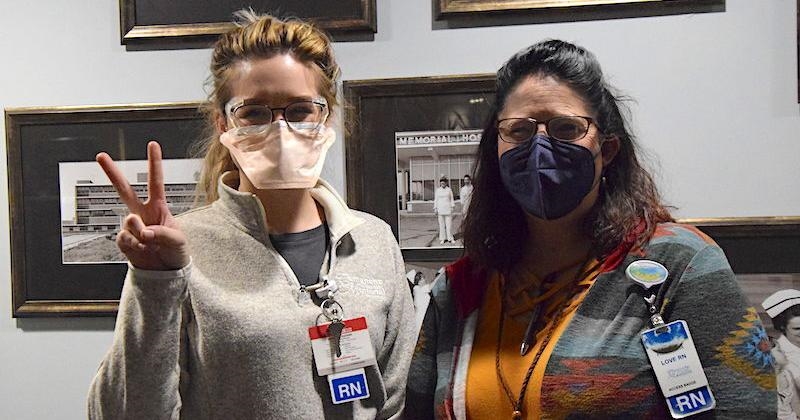 For more than a year, health care professionals at Comanche County Memorial Hospital have been serving on the front lines in the war against the COVID-19 pandemic.

By Friday, almost 800,000 Oklahoma cases have been reported with 11,315 new cases reported by the Oklahoma State Department of Health on Friday alone. This doesn’t include those who’ve been sick and haven’t been tested or who received false positives.

The 12,775 who’ve died from the virus has taken its toll on health care workers’ morale, they’ll tell you.

At Memorial, much of the staff has been pulling double duty to keep up, said Heather Love, RN, the hospital’s Administrative Director of Quality, Safety, Risk Management and Education. She said the past summer’s delta variant surge brought a hard hit for those tasked with caring for the sick.

Many patients died despite the best efforts.

“We had a hard spot after delta hit,” she said. “You don’t expect that amount (of death).”

With omicron’s quick spread, right now it’s a seeming tidal wave. Love noted a saving grace, so far, is the less lethal impact of omicron. But it’s pushing workers to a difficult place.

“We’re just trying to get through this surge again,” she said.

Chief Nursing Officer Chris Ward, who began his career in 1976, compares the fight against COVID to the AIDS epidemic in the 1980s. He said the battle with COVID-19 carries with it so much uncertainty.

Both illnesses involved a lot of uncertainty for health care workers. Much like then, concerns followed how treating someone with it can be transferred to your loved ones, Ward said.

“With COVID, our nurses have been phenomenal,” he said. “The difference is no one ever refused to take care of a patient with COVID.”

Seeing the amount of death in a short time has taken its toll on many.

“I’ve not seen people die like this before,” he said. “Watching people die and knowing this didn’t have to happen, that’s very emotional.”

The pandemic has already slowed down the pace for new nurses to enter the fray. Ward said programs take time for the education of the specialized care provided by the field. New nurses then undergo anywhere from three months to a year of orientation while starting at the hospital. Now, they’ve become weary veterans by the time they face their next surge.

Rachel Talley is a Registered Nurse who began working at Memorial in 2012. Love said she has stepped up to assist in every way while also serving in a difficult role as Coordinator for the Stroke Program. Talley is the norm, not the exception, Love said, though she called her “exceptional.”

“When the (COVID) numbers get high, everyone needs to support and help,” she said. “You adapt so much, so quickly; it’s almost predictably unpredictable.”

Talley said she’s been doing patient assignments and helping supplement staff. A nurse will nurse. But when you lose a patient, it’s tough.

“It’s definitely really hard on your spirit to see families torn apart by this virus,” she said. “I can’t tell you how many people have been regretful they didn’t get the vaccine or take masks and social distance seriously.”

The uncertainty of COVID and how far it will reach is a lot to deal with. Talley said it’s the “fear of the unknown” about “what’s next.”

“Nobody knows who is going to get sick or sicker,” she said. “You’re even having issues with younger people.”

Talley said her experience with the Stroke Program is becoming pertinent with younger people with a COVID history. A higher number of strokes, heart issues and blood clots are being found.

“That’s another thing people don’t understand,” she said. “It’s unknown how it affects the body now versus down the line.”

Then there are those breakthrough moments that offer all the reward. “Small victories,” if you will.

Talley spoke of how a woman who was in intensive care last summer during the delta surge. She recovered. It wasn’t long ago when she returned to thank the ICU staff.

“They had tears in their eyes,” she said.

Love said Memorial’s staff is dedicated 100 percent to carrying out the hospital’s mission. With the possibility of more mutations of the virus developing, she said the staff medical professionals are ready to respond.

“All we can do is brace and prepare for ‘What’s next?’ while continuing,” she said. “Bring it on.”

At Memorial, much of the staff has been pulling double duty to keep up, said Heather Love, RN, the hospital’s Administrative Director of Quality, Safety, Risk Management and Education. She said the past summer’s delta variant surge brought a hard hit for those tasked with caring for the sick.