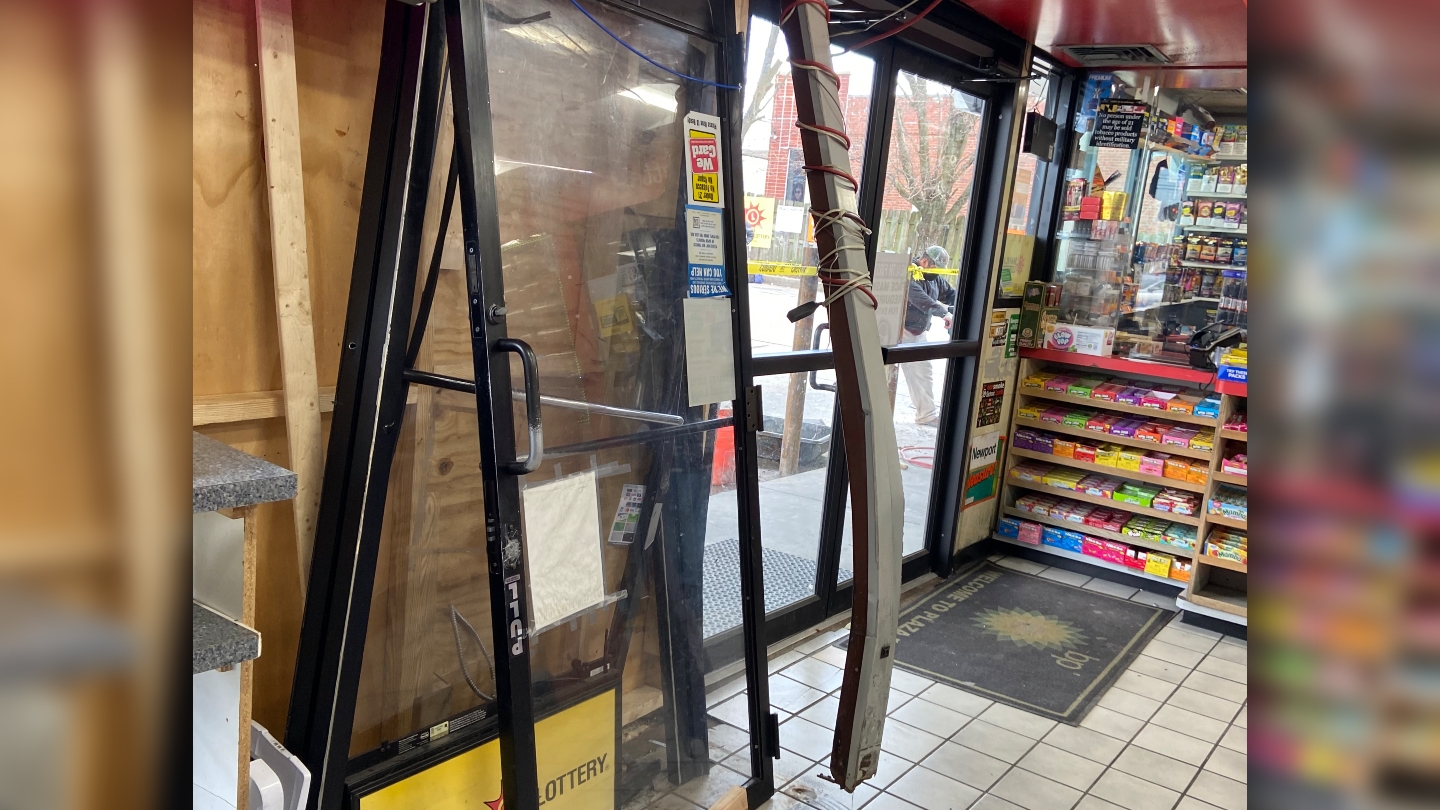 BALTIMORE (WJZ) — Brazen ATM thefts have become common across Baltimore and beyond, with thieves taking mere minutes to smash into businesses for what they see as easy money—and rarely getting caught.

WJZ Investigator Mike Hellgren talked to a small business owner about the impact and what is being done about it. She runs a gas station on Reisterstown Road that was hit just after 5am on December 18th.

“They come. They break in. They have guys waiting outside who can get the ATM. They’re out very quickly—very, very quickly. It is a very professional, organized crime. These guys know what they’re doing,” the victim, who did not wish to share her name, told Hellgren.

The incident was caught on multiple cameras. A stolen van rammed through the entrance five times.

Thieves have done the same thing to dozens of businesses across the city.

Van and suspects outside store. (Photo courtesy of property owner)

“We had read about it, and we were shocked. But it still doesn’t prepare you when it happens to you,” the owner said.

Her employee was inside at the time—just feet away—and helpless to stop the crime.

You see the van pull up. Several people have already gotten out, ready to direct the driver and grab the cash machine once that he hits the gas and slams through the wall.

“There was glass everywhere. They hit one of the steel poles. That could have caused the building to collapse. They have their faces covered. After the fact, it’s hard to catch them,” said the owner.

Eventually, the thieves were able to dislodge the ATM. They quickly loaded it into the van and drove off.

The total time from start to finish: 2 minutes and 16 seconds. Almost two months later, no one has been arrested.

“They’re not afraid of getting caught,” the gas station owner said.

Baltimore City police said they devoted a detective in each district to the problem and ATM thefts were down overall in 2021 compared to the year before.

The crimes are not only happening in Baltimore City but in Baltimore, Harford, Howard and Anne Arundel counties and in other hot spots nationwide—from Texas to California.

Here is a report from a task force to prevent ATM thefts in Texas.

On occasion, the Department of Justice has gotten involved in prosecutions.

The vans and trucks used are typically late model Fords and Chevys. They are often stolen and later dumped with the shells of ATMs left inside.

FROM CHOPPER 13🚁: Police found this van in SW Baltimore this afternoon. They say it contains evidence that leads detectives to believe it was used in an ATM theft. This is just hours after a white van smashed through a Walgreens on York Road and stole the ATM. @wjz pic.twitter.com/G7T5mAbav2

“A good share of it is done by organized crime. They have crews that are trained and experienced,” said David Tente of the ATM Industry Association, a non-profit industry group. “The crimes are increasing; the criminals aren’t being prosecuted.”

He said some larger banks are incorporating dye packs and trackers as security devices but noted those can be cost prohibitive for smaller businesses.

“Time is [the suspects’] enemy so you do anything you can do to slow them down,” Tente said. “…They have crews that are trained and experienced so a lot of these crimes take two, three or four minutes, so it’s not something they’re doing for the first time.”

Tente’s group is building a database of thefts nationwide that will not be available to the general public but is accessible to business owners with ATMs.

“There’s never been anything like this before,” he said.

Tente told Hellgren it is crucial to keep tabs on when and where ATM break-ins are happening.

“Larger banks may keep track but for small businesses, chances are they don’t know about it,” he said.

The organization is also pushing for tougher penalties.

“It’s a property crime. So even if that ATM has $5,000 in it and the crooks got away with all of it, you might as well have stolen a six pack of beer from the store because the prosecution isn’t going to be any different,” he said.

But in Maryland, there have been some felony arrests—including Kirk Parker Jr.

Parker was a Baltimore City employee.

According to court records WJZ obtained, he used a city-owned truck to break into an ATM in Owings Mills. He covered the Baltimore logos with tape.

Here are charging documents from the Parker case, which is ongoing.

Charging documents in attempted ATM smash-and-grab case in NW Baltimore. It’s one of the few times police have caught a suspect—a teenager who they believe did not act alone. @wjz pic.twitter.com/cqqI1jj4Ul In November, Baltimore City police confiscated the cell phone of a teenager accused in an attempted ATM theft at a convenience store near Druid Hill Park. They were able to arrest 18-year-old Said Hamza after he fled through a hole a van smashed through the wall of the small corner shop on Orem Avenue.

“Right now, it seems like they’re just playing catch up with the criminals,” the Reisterstown Road store owner said. “It’s always catch up, and we’re not catching it ahead of the game. And it’s happening frequently enough where I feel there should be some proactive responses.”

Back at her gas station, the damage has yet to be repaired. She told Hellgren Covid-19 has made finding contractors difficult.

“The contractors are very, very backed up so it’s taking a long time. It’s been more than a month, and we are still waiting for it to get fixed,” she said. “… People don’t want to come into a store that’s half boarded so it’s been a hit financially.” Installation of security posts outside of damaged gas station. (Photo via Mike Hellgren/WJZ)

But the thefts keep happening: At least three nearby businesses have also been hit including an attempted ATM theft at the Exxon on Reisterstown Road and Northern Parkway.

Back down the road, the owner is putting up metal poles filled with concrete to protect her store. Her ATM has yet to go back in, and she is not sure what will be her breaking point.

“Insurance is going to go up especially with all the stations that are being hit in the area, so we have to do an analysis: Is it worth the risk? We’re going to try, but if it gets to the point where we feel it’s too dangerous to our employees and business, it might not be worth it. …The worry right now between the gun violence and these other things is it worth the risk to our employees’ lives? That’s the tough question.”