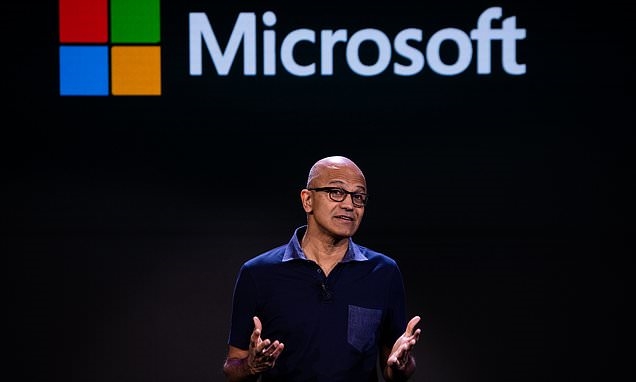 Bosses think workers are less productive at home while workers feel they are more efficient, a major new survey has revealed.

The survey from Microsoft questioned more than 20,000 staff from 11 countries and found that bosses and their employees fundamentally disagree about working from home.

Microsoft chief executive Satya Nadella told the BBC this tension needed to be resolved as workplaces were unlikely to ever return to pre-pandemic work habits.

‘We have to get past what we describe as ‘productivity paranoia’, because all of the data we have that shows that 80% plus of the individual people feel they’re very productive – except their management thinks that they’re not productive.

‘That means there is a real disconnect in terms of the expectations and what they feel.’

The survey found 87 per cent of workers felt they worked as, or more, efficiently from home while 80 per cent of managers disagreed.

The survey found 87 per cent of workers felt they worked as, or more, efficiently from home

The division means employees are embracing hybrid working and are resistant to return to pre-Covid working patters.

Microsoft says that trillions productivity signals across Microsoft Office continue to climb which would seem to support workers’ position.

However, the study also revealed that 85 per cent of bosses say the shift to hybrid work has made it challenging to have confidence that employees are being productive.

The tech giant said this has lead some firms to use tracking technology to measure how productive employees are being which in turn undermines trust and leads to ‘productivity theatre’ – where employees go out of their way to appear busy.

Both Mr Nadella and Ryan Roslansky, the boss of LinkedIn which is owned by Microsoft, told the BBC this meant employers are facing the biggest shift in working patterns in history.

Bosses are missing the visual cues of productivity because employees are not in the office and so become paranoid staff are not working as hard as they could be, Microsoft said.

The company warned that this type of paranoia may make hybrid working unsustainable.

The study found 81 per cent of employees say it’s important that their managers help them prioritise their workload, but less than a third say their managers have never given clear guidance during one-on-ones.

Mr Roslansky told the BBC that remote working roles may have peaked as only 15 per cent of jobs advertised on LinkedIn are remote roles – compared to 20 per cent just months ago and 2 per cent pre-pandemic.

Research published earlier this year showed one in six white collar workers want to quit their jobs this year because their employer is forcing them to return to the office.

A survey of 1,000 employees by messaging app Slack indicated that 29 per cent of workers were considering changing jobs this year with those in legal jobs, IT and telecoms, sales, and media and marketing are most likely to make a move.

While the most common reason cited was a lack of pay rises and bonuses, 16 per cent of those surveyed – or one in six – said they wanted to quit because they were being forced back into the office.

An earlier study found that 20 per cent feel their boss favours those who work in the office over people who work remotely (Pictured: Workers commute to work in London Bridge 2022)

Meanwhile, 20 per cent feel their boss favours those who work in the office over people who work remotely, said the report.

Companies offering hybrid or remote working are less likely to be affected by resignations, with almost a third of respondents saying flexible working policies are encouraging them to stay in their current job.

A third of workers polled said they delayed resigning in the past year amid uncertainty over how the pandemic would affect the jobs market.

As the country emerged out of the pandemic, a host of major companies opted for ‘hybrid’ and ‘blended’ working models in a bid to coax their employees back into the office.

Meanwhile, some said they wanted to encourage more workers to come into the office – and more often – in a bid to provide a boost to the many city centre businesses which rely on commuter trade.

As the cost of living crisis continues to hit families across the country, it is thought some workers may be motivated to head back into the office in a bid to cut down on energy bills.

Bills are predicted to rise to £5,400 in January and even further to £6,600 in spring according to forecasts from energy analysts Cornwall Insight, The Telegraph reports.

The average British worker is heading into the office one and a half days per week, meaning remote working will likely lead to an energy bill of £789 in January, compared to £580 for those going into work.

The Office for National Statistics said in July that 37 per cent of Londoners were working away from the office, compared to 14 per cent before the pandemic.

Every day energy uses can add significantly to monthly bills. Boiling a kettle three times a day will cost £8 per month or £100 a year, under the October energy price cap, Citizen’s Advice Bureau has found.

Similarly, running a desktop computer eight hours a day will cost £35.68 per month.

‘We have to get past what we describe as ‘productivity paranoia’, because all of the data we have that shows that 80% plus of the individual people feel they’re very productive – except their management thinks that they’re not productive.