Meet the Twitch, YouTube Streamers Who Deradicalize While They Debate 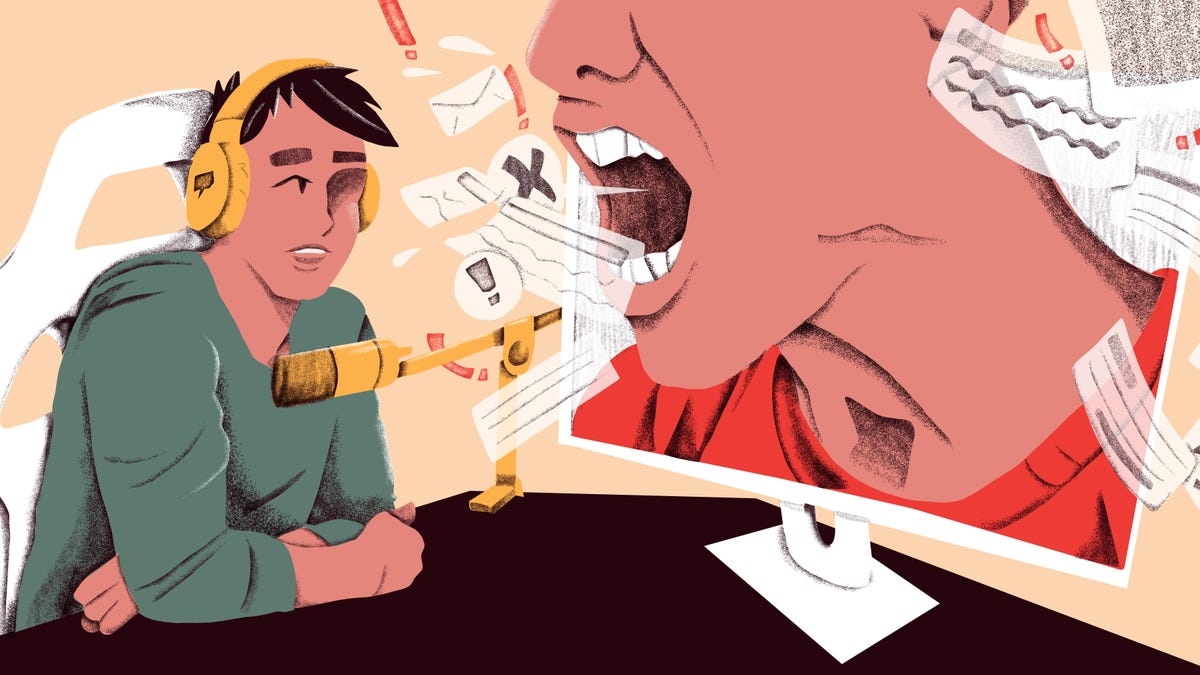 Hunter Avallone’s job is to argue with strangers on Twitch and YouTube. Last August, he was taken aback when one person sent him an outlandish message about the COVID-19 vaccines.

“Once someone takes it, they lose their soul,” David Argenti, who grew up in Canada’s Bible Belt, told Avallone in a message he shared with his streaming audience. “Nothing has led me to believe otherwise.”

For more than a half-hour, the two argued back and forth in a debate that was as biblical as it was scientific. Avallone threw out facts and dissected the meaning of biblical passages Argenti presented him with. The debate ended amicably, and a week later, Argenti got vaccinated.

These debate streamers are having success converting people, like Argenti, by employing logic, humor and compassion to create connections with people holding extreme views. Debaters like Avallone spend hours each day discussing politics and current events, often pulling their viewers from the brink of the misinformation abyss. They’ve become an informal part of an alliance of fact-checkers and researchers who are fighting to promote facts about COVID-19, election security and Russia’s invasion of Ukraine.

Debate streams rode a surge in viewing hours on Twitch and YouTube since the start of the pandemic, with political topics attracting a growing fanbase. Twitch’s Politics category tripled in viewership year over year from May 2021 to May 2022 with more than 1.7 million hours watched, according to Jason Krebs, chief business officer for creator tools provider StreamElements.

These streamers have made arguing and discussing politics their livelihood. They earn money from ads, subscriptions and donations made by their viewers, which can range from a few dollars to more than $100.

Combating misinformation where it spreads

Misinformation has been called a threat to the health of Americans by US Surgeon General Vivek Murthy and Food and Drug Administration Commissioner Robert Califf. One analysis found that more than 300,000 COVID deaths could have been prevented by vaccinations, a frequent target for misinformation.

Argenti’s extremist view on the COVID vaccines – which have been proven to be safe and effective – came from his religious background. At the time of the debate, he was 22 years old and living in the Bible Belt of Canada in southern Ontario. His family and his social circle are part of a Christian sect that vocally opposed COVID restrictions and held large in-person services during the height of the pandemic. When the vaccines rolled out, their views on the shots were extreme.

Argenti had little doubt about the claims he made. He said his parents urged him not to get vaccinated and shared with him docs and videos he now calls propaganda.

He said after the debate that he realized the vaccine was not only “safe and effective, but that it was a spiritual good to take it, that it was a necessity to take it.” He added that he felt a “spiritual obligation” to get vaccinated to protect others based on the scientific evidence.

Despite efforts by both Twitch and YouTube to stop the flow of misinformation on their platforms, debate streamers aren’t lacking in people to argue with. Both sites are still full of people who peddle misinformation, sharing conspiracy theories and false claims to their fanbases.

Avallone’s success in reaching his viewers may stem from his own conversion from conservative firebrand to progressive sympathizer. He started making scripted videos more than six years ago and was considered a young, conservative YouTube star. He created content filled with right-wing talking points and regularly targeted progressive issues such as systematic racism and gender equality. In 2019, he began to question where he stood politically.

“I was confronted with a lot of data and information, and also arguments that I hadn’t heard before,” Avallone said. “And all of that along with things happening in my personal life that kind of put me in a place of reassessing my beliefs.”

Avallone eventually changed his political leanings entirely and started livestreaming rather than posting scripted videos. He said he enjoys the engagement with viewers as well as the free flow of conversations. At the end of 2020, he began live-debating politics on YouTube and Twitch, when the political polarization in the US was at a fever pitch.

Avallone said he’s been analyzing his performances and figuring out different rhetorical approaches. In his debate about COVID vaccines with Argenti last year, he used his understanding of the Bible to counter the belief that the vaccine was made by the devil.

“I still believe that the approach that I took there was probably the best because if you believe that the vaccine is the mark of the beast that just doesn’t actually add up with the biblical text,” Avallone said. He said it didn’t make sense for something considered to be from Satan, as Argenti believed at the time, to be used in healing people.

While he was shocked by Argenti’s outlandish argument, Avallone didn’t resort to ad hominem attacks and insults. Instead, he met Argenti halfway to answer questions thoughtfully and earnestly.

Avallone said he receives messages from people who say his debates and videos changed their minds about conspiracy theories or pulled them away from far-right conservatism. He said it’s encouraging and satisfying to change people’s minds.

“I take very seriously realizing that I’ve turned one more person away from conspiracism or bigoted beliefs or hyper-religious beliefs that are leading to harm,” he said.

It takes a lot of work to change one mind

Even though a debate can change a person’s mind, there’s a bit more needed than rhetorical skills to do so.

Michael Phillips-Anderson, a communications professor at Monmouth University who researches political rhetoric, doesn’t believe replaying these debates to a large audience would be broadly effective to change expansive swaths of minds at once. What’s important for someone to change their mind on their stance is having some wiggle room in their beliefs.

That “non-attachment” helps debate streamers change minds on a smaller scale, those of the people they’re directly debating or viewers seeking out livestreams for information or entertainment. Avallone had some wiggle room in his earlier conservative beliefs and said a debate with another streamer helped spark a change in him.

Ian “Vaush” Kochinski has been making progressive political videos and streaming for more than three years. He debated Avallone in June 2019 and takes partial credit for his change in politics.

Unlike Avallone, Kochinski doesn’t spend a lot of time researching topics or even trying to debunk the conspiracy theories he’ll debate. He’s found some of his opponents who push conspiracies tend to know much more than what could be easily found online. When debating those with hardened beliefs, he finds it important to be personable.

“The most effective way to convince [his debate opponent] is to break that illusion for a bit by making them laugh, by coming off in a manner different than what they expect. Maybe a little more jovial or friendly than they expect me to be,” he said.

For Avallone, his way to reach into that wiggle room for the debate audience is to offer an alternative narrative. He said instead of just presenting facts to prove Argenti was wrong, he focused on arguing what was more believable.

It all started with Destiny

Steven “Destiny” Bonell is a sometimes controversial streamer who many point to as the de facto originator of the political Twitch stream. He started streaming games in 2010 on the predecessor to Twitch, Justin.tv. Bonnell was a professional gamer playing Starcraft II matches online, but in 2016, he began indulging his interest in arguing with people and started to talk about politics on his streams.

His political streams influenced both Avallone and Kochinski, with the latter being part of his community and venturing out on his own. Bonnell also has been changing minds for years.

In 2019, The New York Times wrote about Caleb Cain, a then 26-year-old who became critical of the alt-right movement after being a part of it for five years. One of the events that helped change Cain’s mind was a debate Bonnell had with then far-right activist Lauren Southern. Cain viewed Bonnell to be the winner in their debate about immigration in 2017, and it was then that his view of the alt-right began to crack, according to the Times.

Bonnell still debates today, although on YouTube and other streaming platforms instead of Twitch. He was banned from the gaming platform earlier this year for violating its community guidelines related to “promoting, encouraging, or facilitating the discrimination or denigration of a group of people based on their protected characteristics.”

He said he still hasn’t been told exactly why he was banned but speculates that it’s related to his history of using “fiery language” or comments he made toward some online trans activists. Twitch didn’t respond to a request for comment.

Over his debating streaming career, Bonnell has changed tactics from overtly aggressive, like Avallone and Kochinski, to try to meet the person halfway and slowly change their mind.

“In order for them to acknowledge anything I’m saying is true, they’re going to have to accept a deeply uncomfortable analysis of themselves,” Bonnell said. “That makes them out to be a bad guy. Nobody’s a bad guy in their own mind.”

Like Avallone, during the pandemic, he also debated people opposed to COVID-19 vaccines and was able to convince some to change their position.

When Argenti confronted his own beliefs on the COVID vaccine, he said he felt anxious and scared. He knew changing his mind on this matter would cause a rift within his social circle but wanted to do what he felt was both right and more likely to provide the most good.

He said his community has told him that he’s going to hell and that he’s been possessed, but in the end, he’s still glad he got vaccinated.