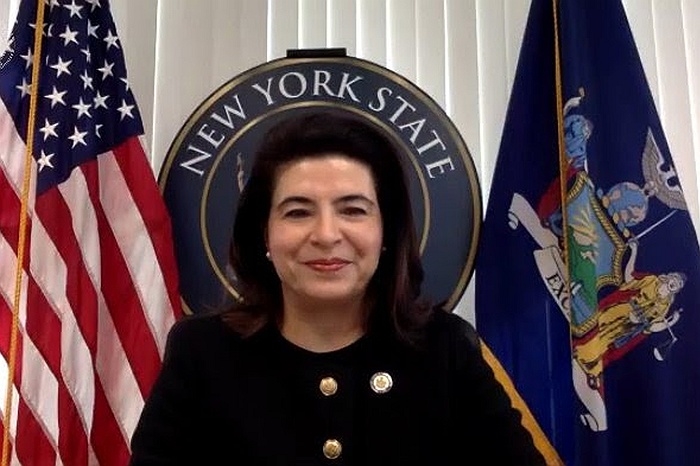 “Since the start of this pandemic, the Senate Majority has taken action to help our business community survive and recover from this pandemic,” Stewart-Cousins said. 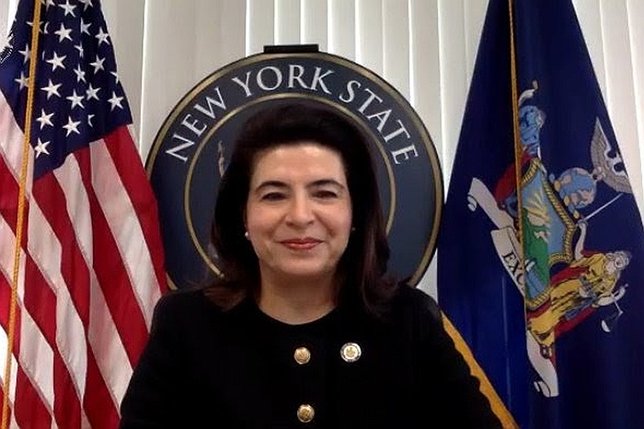 Photo by: Office of Senator Kaplan

The New York State Senate has passed legislation introduced by Senator Anna M. Kaplan (D-North Hills) to support small businesses and unemployed workers who are still dealing with the impacts of the pandemic. The bill, S.6791A, freezes increases in the unemployment insurance taxes that businesses pay for the 2022 and 2023 fiscal year, preventing a previously scheduled tax hike from taking effect. Additionally, the legislation will increase the maximum unemployment benefit for workers who have lost their jobs by up to 10.5%. Passage of the bill is the latest effort by Senator Kaplan to address the looming threat of rising unemployment insurance taxes that could cripple small businesses across the state and potentially cause untold layoffs.

Chair of the Committee on Commerce, Economic Development and Small Business and bill sponsor, Senator Anna Kaplan said, “So many of our State’s small businesses barely survived the challenges of the pandemic, and if we allow them to be hit with massive increases in their payroll taxes, many will be forced to close their doors for good. Our long-term economic recovery depends on the success of our small businesses, so I introduced legislation to give them a break by cutting the unemployment tax rate that they pay for each employee, and I’m leading the charge to replenish the State’s unemployment insurance trust fund with a significant allocation in the State budget. At the same time, we can’t forget about workers who lost their jobs due to the pandemic and who rely on unemployment insurance benefits to make ends meet, so I’m proud that my legislation will deliver a meaningful increase in weekly benefits to help them during these challenging times. I’m grateful for Majority Leader Andrea-Stewart Cousins for bringing this legislation to the floor for a vote, and for her leadership to ensure that the Senate is always responsive to the needs of New York’s small business community.”

“Since the start of this pandemic, the Senate Majority has taken action to help our business community survive and recover from this pandemic. Today we are taking urgent action to delay an increase in unemployment insurance taxes because we know businesses can not take on this burden as they struggle just to keep their doors open,” Senate Majority Leader Andrea Stewart-Cousins said. “This pandemic has created many unforeseen fiscal challenges, but this legislation takes action to give businesses across New York State time to get back on their feet, as well as still support workers across New York State who lost their jobs. I want to thank Senator Anna Kaplan for carrying this bill to the floor and taking another step to help our businesses recover and assist New York’s workforce.”

The pandemic has placed unprecedented demands on the State’s unemployment insurance system, exhausting the funds New York initially held in the Unemployment Insurance Trust Fund, and forcing employers into the highest employer contribution rate allowable under current New York State Law. It’s for this reason that today’s effort is critical to prevent further cost increases to small businesses, and it’s also why Senator Kaplan is leading an effort to replenish the trust fund through a significant allocation in the upcoming State Budget. Previously, Senator Kaplan wrote a joint letter signed by several of her colleagues urging Governor Hochul to allocate $2.5 billion towards fund replenishment in an effort to protect small businesses from future tax increases. (Click here to read the letter)

Mario Cilento, President of the New York State AFL-CIO, said, “Far too many New Yorkers continue to struggle financially after losing employment due to the pandemic. That hardship is more challenging given inflation and other cost increases, combined with the fact the federal unemployment relief expired in September of last year. That is why this bill is so critical. It will clear the way for the state’s maximum weekly unemployment benefit to catch-up to the scheduled increase level for 2022, providing much needed relief to unemployed workers trying to figure out how to make ends meet. I thank the sponsor of the bill, Senator Anna Kaplan, and Labor Committee Chair Senator Jessica Ramos for their leadership on this issue, and Senate Majority Leader Andrea Stewart-Cousins and the Senate Democratic Majority for supporting this important legislation.”

Ashley E. Ranslow, NY State Director, National Federation of Independent Businesses said, “NFIB applauds Senator Anna Kaplan and her colleagues for advancing legislation to cut small businesses’ Unemployment Insurance tax bills for the next two years. New York’s Main Street businesses are paying the highest possible UI tax rates at a time when they are still digging out of COVID’s economic devastation. Small businesses are the engines that drive our state and local economy, and now, more than ever, are in desperate need of financial relief. The Senate has stepped up and led the way on this issue and we look forward to continuing to work with our Senate partners, members of the Assembly, and the Governor to ensure that the budget includes much-needed funding to restore the UI system.”

Heather C. Briccetti, Esq. President and CEO of The Business Council of New York State, said, “The Business Council supports this proposal to provide needed relief from increased payroll taxes on New York employers, many of whom continue to deal with ongoing COVID impacts in the workplace. This is an important first step, and we appreciate the support and action by Leader Stewart-Cousins and Senator Kaplan. We also applaud Senator Kaplan and her colleagues, who continue to call for state financial support of the Unemployment Insurance system to help address the more than $9 billion in federal debt payments facing the private sector that resulted from state-directed business shutdowns.”

Mike Durant, President & CEO, Food Industry Alliance of NY said, “We thank Leader Stewart-Cousins, Senator Kaplan and their colleagues for recognizing the significant impact the public health crisis has had on employers, particularly with respect to unemployment insurance costs. We are strongly supportive of this legislation as a necessary first step for both employers and their employees. We hope to continue working with the Legislature in addressing action in this critical area.”

Jeff Williams, New York Farm Bureau Public Policy Director, said “Unemployment Insurance taxes paid by employers have steadily increased creating yet another burden for our state’s family farms that often operate under thin profit margins. This legislation would provide some relief at a time when labor costs continue to rise on our farms. New York Farm Bureau appreciates the Senate Majority’s support with the passage of this important bill. New York State must chart a pathway forward for its small businesses, helping them to not only compete but also reinvest in their businesses, employees, and communities.”

Zach Sampson, spokesman for Upstate United said, “We thank Senator Anna Kaplan and Majority Leader Andrea Stewart-Cousins for leading the charge on S.6791A. This sensible unemployment insurance reform will help employers across New York save money at a time when they’re seeing rising costs across the board. We urge the members of the Assembly to take immediate action on this measure.” “Moving forward, we hope to see additional efforts to tackle New York’s $9.4 billion UI crisis. Like Senator Kaplan and several of her Senate colleagues, we believe that investing federal aid to partially pay down the state’s $9.4 billion UI debt is the right thing to do right now. Struggling employers simply can’t afford a massive UI tax hit. We look forward to working with Governor Hochul and the Legislature to address this crisis in this year’s budget.”

Following passage in the State Senate, the bill now goes to the Assembly for consideration.