Institutions Are Still ‘Wait-And-See’ With Ethereum 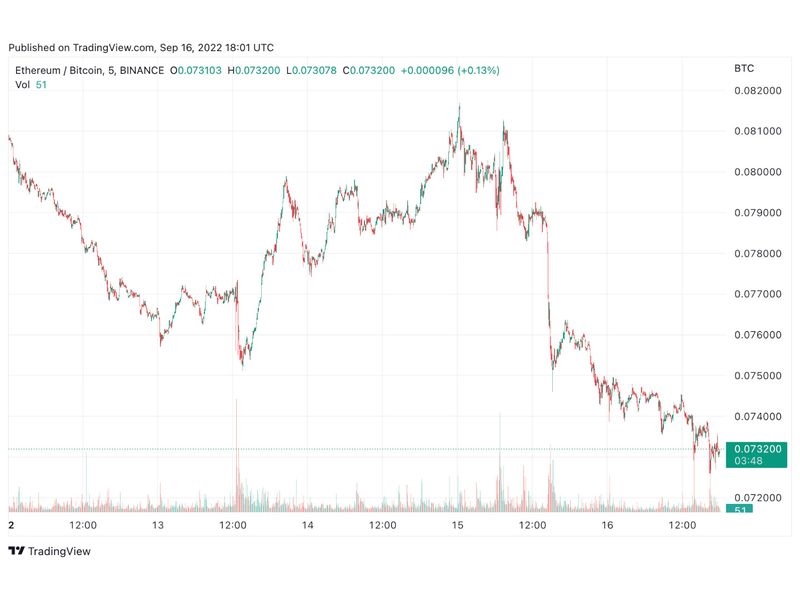 The Merge has finally happened, and while bitcoin remains the preferred cryptocurrency of institutions (and one nation-state, El Salvador), Ethereum’s new consensus mechanism – and the scalability that is supposed to go with it – may attract some interest away from its bigger, older brother as the biting cold of the crypto winter continues.

Still, institutions may be hesitant to jump all in on ether just yet. One reason is regulatory uncertainty. U.S. Securities and Exchange Commission Chair Gary Gensler said proof-of-stake cryptocurrencies may be viewed as securities, though the regulator said he wasn’t talking about any specific coins. Nevertheless, his comments helped cause ether’s price to take a hit Thursday.

Meanwhile, it seems that if there were any flows from bitcoin to ether, much of that was stanched with the onset of the Merge.

You’re reading Crypto Long & Short, our weekly newsletter featuring insights, news and analysis for the professional investor. Sign up here to get it in your inbox every Sunday.

At the start of the day – Sept. 15 – that the Merge happened, ether was trading for roughly 0.0817 BTC on Binance, according to data from TradingView. Fifteen hours later, it was changing hands at 0.0746 BTC and continued falling. 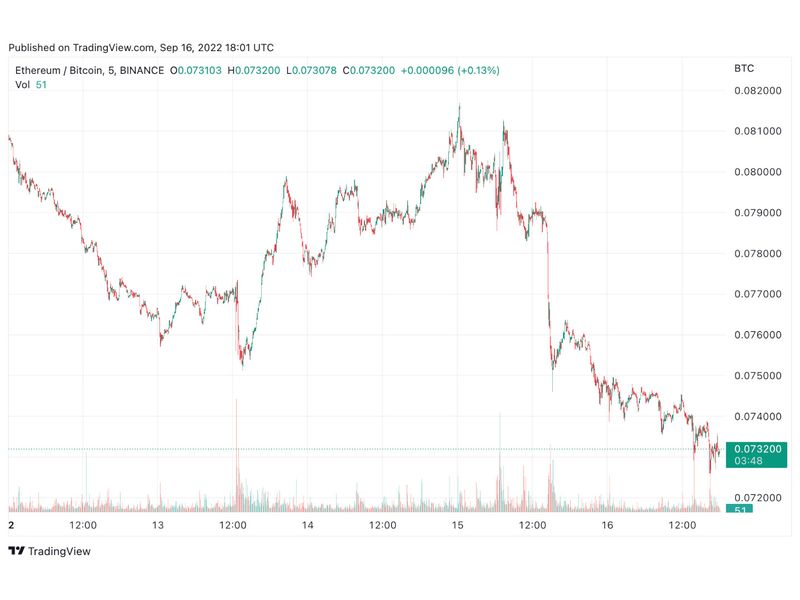 Read more: The Ethereum Merge Is Done, Opening a New Era for the Second-Biggest Blockchain

That’s a depressing chart, one may think. Except that’s only five days of data.

Let’s step back and look at how ether has been trading against bitcoin since the early days of the former’s life.

The Beacon Chain bottom and other ratios

The Beacon Chain, with which Ethereum ultimately merged, was launched Dec. 1, 2020. At the time, ether cost 0.0313 BTC. Thus, it has more than doubled in value since then. 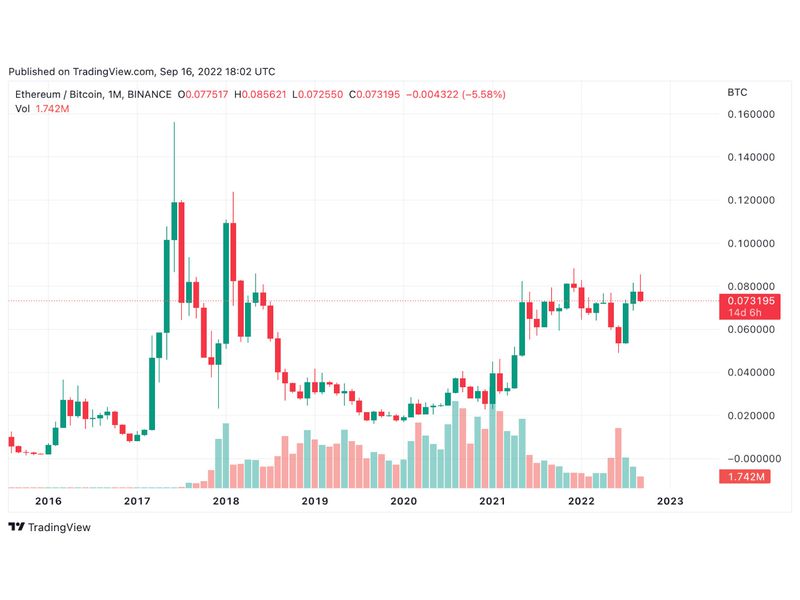 Still, that doesn’t say anything about institutional interest. After all, prices can move based entirely on retail interest.

Trying to gauge institutional interest may be a bit tricky. For instance, using futures volumes isn’t as clear as one may expect. We see that, on a ratio of dollar volume basis, ether futures have been regularly outpacing bitcoin futures since July, according to data from Skew.com, though it recently took a hit. 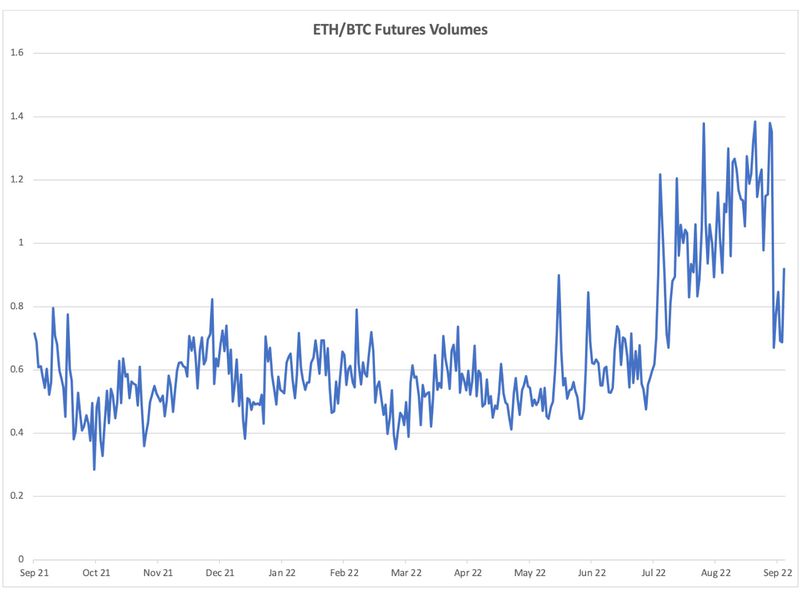 That doesn’t tell us much about institutions because some of the exchanges Skew uses for data cater to retail investors with high risk tolerance.

There is at least one futures exchange, of course, that might be a good proxy for Wall Street’s interest and that’s the CME. The ratio of volumes between the two cryptocurrencies is way different: 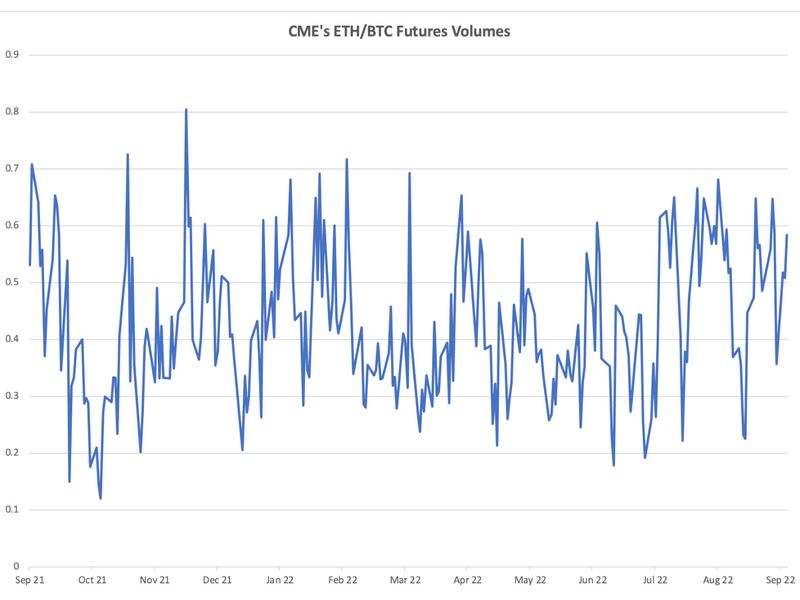 The CME’s ratio of ether to bitcoin futures is decidedly all over the place, but it’s evident that dollar volumes for ether contracts on the CME have yet to surpass that of bitcoin futures contracts.

In the spot market, though, exchanges themselves can get a sense of the players interested in a currency.

A lot of that, Zagotta said, could be attributed to investors “selling the news” with the success of the Merge.

Quiet before the rally?

Meanwhile, ether’s drop in price didn’t just happen against bitcoin; it happened versus the U.S. dollar as well. Though the drop disappointed HODLers this past week, there are those who aren’t ruling out enormous upside down the road.

Matthew Sigel, VanEck’s head of digital assets research, likens ether’s performance versus USD after the Merge to what happened to bitcoin after significant changes.

“There are plenty of examples of big crypto developments, including bitcoin halvings, where the price traded in a range for weeks or months,” Sigel said on CoinDesk TV’s “First Mover” program Thursday. “It just takes one major stakeholder to make a decision to buy after some stability in the network. That can take days, weeks, months – who knows?”

Sigel, who has a five-year price target on ether of $8,000, noted four times as much ETH was staked on the Ethereum network in the six hours after the Merge than in the entire history of the Beacon Chain prior.

“It seems pretty clear that those who are in the markets are now making the decision to commit and lock up that liquidity,” he said. “That’s probably a trend that will continue over time, so the early results are, I think, pretty encouraging notwithstanding the price action.”